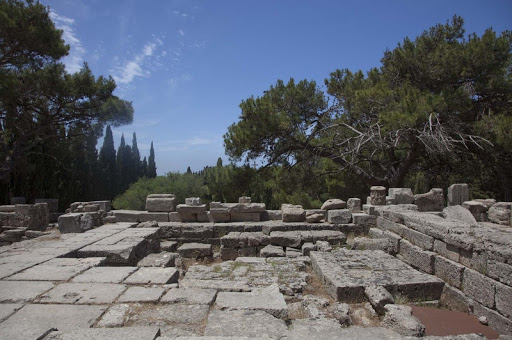 Its earliest known name, from the Mycenaean period, was Achaia; Strabo called the hill Ochyroma (fortification) and from very early times Filerimos was in fact used as a strong point and also as a place of worship.

Remains of a Minoan settlement were found close to the village of Trianda while Mycenaean cemeteries, dating from 1700 – 1400 BC, were located on the surrounding Makria and Moschou Vounara hills.

Archaeological finds, most of them displayed in the Rhodes Archaeological Museum, indicate that the area was inhabited as early as in the beginning of the 2nd millennium BC.

Extensive excavations, carried out during the Italian domination of the island, revealed late Classical and early Hellenistic remains on the flat upper part of Filerimos, mostly on the eastern side of the mountain. They include the foundations of the temple of Athena Polias, an Early Christian basilica, a small subterranean Byzantine church and Doric fountain house.

The remains of the temple of Zeus and Athena Polias are at the highest point of the Filerimos hill, an amphiprostyle Doric temple and the foundations for the cult statue.

Materials from the ancient temple were used to build a three-aisled Early Christian basilica constructed on the same site in the 5th or 6th century AD. Its baptistery, in the shape of a cross, is still preserved. The north aisle of the basilica, above the ancient temple, was repaired in the Byzantine period and converted into an aisle less church.

The tiny church, to the west of the ancient temple, apparently also belongs to the Byzantine period. In the 15th century its walls were covered with icons depicting the Passion and the Life of the Virgin Mary, as well as a series of Knights with their patron saints. Although they were basically western in style, these wall-paintings were influenced by the Byzantine painting tradition.

To the west of the parking area the catholicon of a monastery complex dating from the 10th century AD has been excavated, it is a three-aisled cross-in-square church with three apses and a dome supported on four columns.

The Byzantine remains include the ruins of the Byzantine fortification of Philerimos. At the eastern end of the flat summit of the hill an entire garrison complex was repaired and used during the period of the Knights of St. John.

The church built by the Knights, in the 14th century, two hexagonal chapels in the area of the aisle less Byzantine church, was modified in the late 15th century. Its distinctive double form was retained since the icon of the Panayia Philerimou (Our Lady of Philerimos) was worshipped by both Orthodox and Catholic Christians.

Italians built a “Golgotha” at Filerimos with relief scenes of the Passion of Christ. This leads from the square to a large cross at the west edge of the Filerimos Hill plateau. Great views over the coast, inland to Rhodes’ highest mountain, Ataviros.