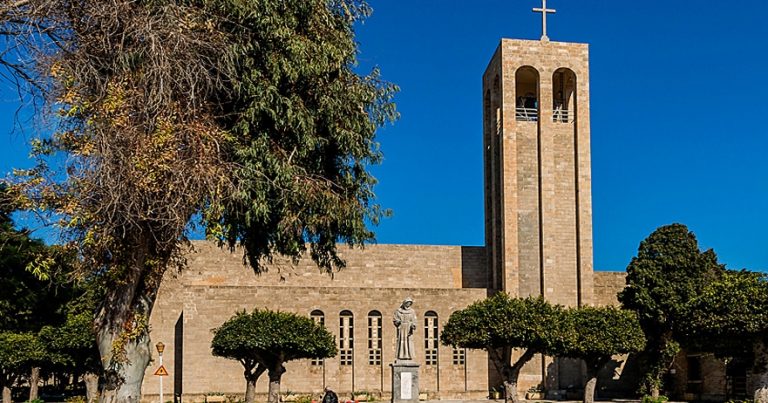 The Catholic Churches of Rhodes, Dodecanese: The long occupation of Rhodes by the Venetians and the Italians, from the Middle Ages till 1948, has left its strong mark on the culture of the island. This is depicted in the architecture as well as the many Catholic churches in Rhodes island. Very few of them work today. Hereby we present you the most important Catholic churches in Rhodes.

The church of Our Lady of Victory, known as Santa Maria is the most famous Catholic Church on the island. Originally the church was destroyed during the Grand Siege in 1522. The church distinguished for its gothic architecture and it was rebuilt in 1742, while it became the official Catholic Church of Rhodes. The building complex includes the Monastery of Franciscans of the Custody of the Holy Land, the pastors of the island and the monastery guesthouse that has been the scope of historical studies and researches. During the 1960s, the church underwent many renovations and reconstruction works. Today, the church is centrally located in the New Town of Rhodes, near the Casino.

The Church of Agios Frangiskos (Saint Francis of Assisi) is the official Latin Church of Rhodes. It is situated next to the Orthodox church of Saint Athanasios. Its construction began in 1936 and it was completed in 1939. It is dedicated to Agios Frankiskos, a man who fought in many wars and lived a high- spirited life in great poverty. A vision that he saw during a serious illness led him to dedicate his life to charities. He is known as the patron saint of animals.

The church was designed by the Italian architect Stefano Pellini and has very nice acoustics. It has a unique architecture with white marble. The walls of the chorus depict the three most significant events from the life of Saint Francis. A local craftsman created an iron statue of Saint Francis, at the right side of the church where it standstill today. The statue is surrounded by blackberry bushes, palm trees, and animals. The church celebrates on October 4th.