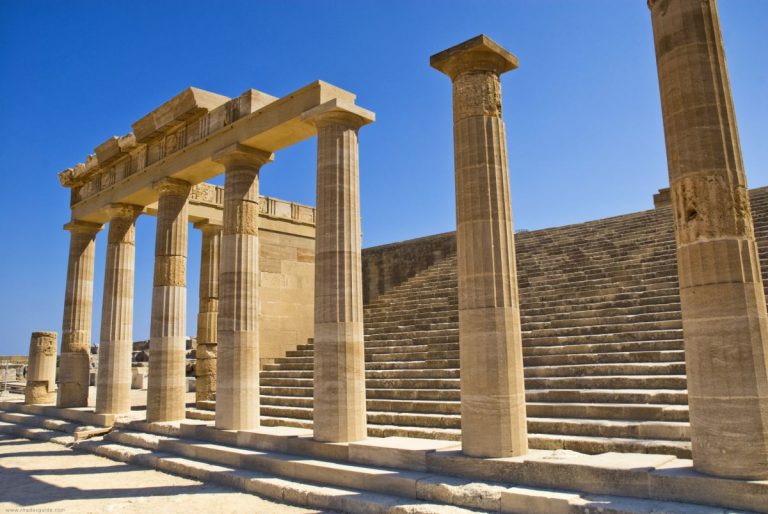 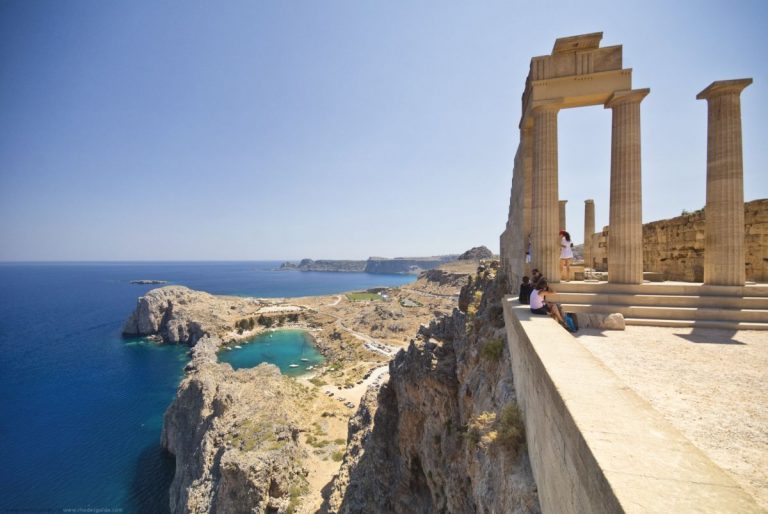 Lindos is for most visitors the most impressive archaeological site on Rhodes. The dramatic natural landscape is enhanced by the picturesque quality of the more modern town, with the Lindos Acropolis rising dominantly on a steep cliff at 116 m height like a sovereign podium overlooking the sea, framed by mighty fortress walls.
While you will find the most important archaeological monuments at the Acropolis, interesting ruins are scattered at various points within the town and just outside it as well.

On the summit of the Lindos Acropolis are the ruins of the goddess Athena Lindia, temples from the 4th century BC As well as the Propylaea, the great Hellenistic Stoa and the Byzantine chapel of Saint John. In the time of the Knights of St. John, the castle is surrounded by sturdier fortress walls while the flowering period of Lindos extends as a naval power up to the 19th century.

According to myth, the cult of Athena Lindia was pre-Hellenic, although this is not borne out by the sporadic excavation finds. The history of the sanctuary begins in the Geometric period (9th c. BC). In the Archaoc period the tyrant of Lindos, Kleoboulos, revived the cult and built a temple, probably on the site of an earlier one. The Archaic temple had the same Doric tetrastyle amphiprostyle plan as the subsequent one.

The sanctuary was approached by a rough flight of steps. After it was burnt down in 342 BC, the present temple was built with the Propylaea and the monumental staircase. The Hellenistic stoa is later. In the 3rd c. BC the cult of Zeus Polieus was introduced, although Athena remained the principal deity of the sanctuary. In the Roman period the priest Aglochartos planted olive trees on the spot, and according to an inscription the Sanctuary of Psithyros was built close to the Temple of Athena (2nd c. AD).
Archaeological site of Lindos
The archaeological site of Lindos extends outside and around the Acropolis and includes the following monuments:

Theatre
This is on the southwest side of the hill, below the Temple of Athena. The circular orchestra and the auditorium for the spectators were hollowed out of the the side of the hill. The proedries, honorary seats around the orchestra for officials, still survive. The auditorium has 19 rows of seats below the diazoma and 7 above it. The first three rows were also intended for officials, and low walls at their sides separated them from the auditorium staircases. Only five of the nine cunei have survived. The theatre held 1,800 spectators.

Four-portico building.
There are remains of a four-sided building in the extension of the skene of the Theatre. On the inside columns on all four sides supported a pitched roof and surrounded an open-air courtyard. The entrance on the northwest side had a porch (row of columns) which carried an architrave. The building held 1500-1700 spectators and was intended for religious ceremonies. At a later period the place was occupied successively by three Christian churches.

Boukopion.
At Vigli, northeast of the Acropolis, was the Boukopion, a place of sacrifices as the name implies. 38 inscriptions on the rocks around identify the place. A naiskos (small church) built of small field stones with a temple, pronaos and kind of vestibule contained the votive offerings (clay and bronze figurines chiefly of oxen) to a deity at present unidentified (10th-9th c. BC).