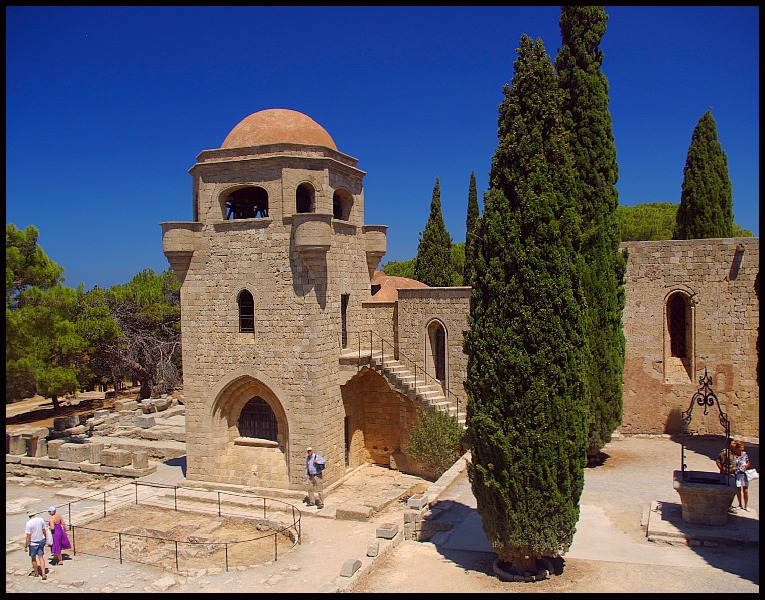 Mt. Filerimos (Philerimos, Φιλέρημος), just outside the capital Rhodes (15km), is a hill 267m. high, overlooking the small town of Ialyssos and the bay of Ixia and Trianda. From its top you can enjoy a panoramic view of the Aegean with turquoise waters near the shore and deep blue as it stretches toward coast of the Asia Minor. Thickly planned with cypresses, pines and other trees, it is an ideal location for a long walk into the Rhodian nature. A winding road leads to the top of the hill where, in relatively wide plateau, the Monastery of Filerimos is located. This place is also an important archeological site; here once stood the Acropolis of the ancient town of Ialyssos with an important temple dedicated to Athena Polias.
When Christianity first grew its roots in Greece (before spreading in the world), many of the ancient cult sanctuaries were transformed into churches. At that time the temple was converted into an early Christian three-aisled basilica dedicated to Vergin Mary (Panagià, Παναγιά). The church is well known since for housing the icon of the Virgin of Filerimos. Attributed to St. Luke the Evangelist, the icon was brought in to Rhodes during the 13th century, probably from Jerusalem where it remained until 1523. Under the rule of the Knights of St. John a Monastery was built, surrounded by cloisters and cells and a number of chapels. When the island came into the possession of the Ottoman Turks, the icon was taken by the Knights to France and from there to Italy, then Malta and Russia, where it stayed until the 1917 revolution. Since 2002, it has been kept in the Blue Chapel of the National Museum of Montenegro.

The Monastery was destroyed by the Turks. In 1876, various excavations brought into light a Mycenaean pottery, a Doric foundation and the ruins of the Hellenistic temple of Athena Polias. In the ’20s, during the Italian occupation, in the effort to consolidate and justify the Italian presence on the island, a major reconstruction was carried out. They added a Via Crucis (Calvary), a pathway that leads from the monastery towards the south-western edge of the plateau, to a small square with a stunning view dominated by the Mt. Attavyros in the distance. Here an imposing iron Cross stood in the middle. The Cross was later destroyed as it was used by the allied war planes during the WWII as a landmark to hit the airport. Along the right side of the path, stone altars were built with embedded reliefs, depicting scenes of the Passions of Jesus. They even brought a congregation of Capuchin monks but no particular care was taken for the Hellenistic and Byzantine relics.
Today the Monastery remains almost unchanged. A long stair in the entrance leads up an avenue of cypresses and bougainvillea to the cloister and the foundations of the temple. The Early Christian basilica, and the small subterranean Byzantine church are open to the visitors. It is the preferred place by the Rhodians for wedding ceremonies. Stunted pastel cedars form now an archway in Via Crucis, leading to the belvedere where a few years ago a new gigantesque Cross made of concrete, was erected.